MySelf Kapil Chandak, I am all time die-hard fan of Sir Lucky Ali (Singer-Composer-Actor-Song Writer). I have made an exclusive presentation LuckyWorld - दुनिया लकी अली की which containing almost everything about Lucky Ali in 168 slides. If you love music you must download this Presentation file to watch.

Download Link: https://docs.google.com/open?id=0B6dafoiw9XinY2JCSG5fQUhHZXc      ﻿﻿﻿ ﻿
﻿
This presentation is dedicated to Sir Lucky Ali. I’ve been loving him since ‘Sunoh’ (His debut album which came in 1996) released. I have no words to express what he is for me. I love each song sung by living legend which is really special for me. His songs are source of my inspirations and passion. I can’t hold myself to sing them when I listen to him.
Every song has incredible music which leaves melodious impression forever. Each word of his songs has true, soulful, pleasing feeling that touches your heart. His songs make my every day. I find my dreams, my hopes, my aspirations, my philosophy, my happiness, my reflection very close to his meaningful songs. Sir Lucky Ali’s songs take me to the world full of love, peace, goodness, passion, hopes, dreams; where I discover my inner self. I salute him.
﻿﻿
﻿
﻿I had a dream to make a presentation on Lucky Sir which has almost everything about Sir Lucky Ali; because I know his fans are dying to know him very personally like me. Now every lucky fan can get lucky and spread lucky charm among lucky people.
New Lucky World (Duniya Lucky Ali Ki) has got…
* Introduction: It’s brief intro of Singer, Musician, Song-Writer and Actor Lucky Ali.
* Singing Career: It’s time wise list of his all songs with name of musician, lyricist and co-singer.
* Filmography: It’s time wise list of his movies with brief info of the roles he played.
* Biography: It contains everything about Lucky Ali from his birth to present.
* Awards: This is a list of all awards he got for his outstanding talent.
* Song’s Lyrics: It has complete lyrics of his all songs (including Tamil and Telugu songs) with meaning of a few typical Urdu words under the title “Ezee”.

﻿ ﻿
﻿﻿
﻿* Inspiring Videos: There are stories, reviews and info of his all refreshing videos.
* Lucky Facts: It’s containing some interesting untold facts which are worth knowing.
* Songs in English: It’s a English translation of a few songs of Lucky Ali.

On one occasion I lost all data due to formatting of computer by its owner it was very shocking for me as it had got completed more than 60% but I started making it again without wasting a single moment. I released it first time in September 2004 through Luckyali fanclub on Yahoo and later on Orkut, 4shared etc. I have been getting many compliments and encouragement from lucky fan of Lucky Ali all over the world through call, sms, email, scraps and found many good friends forever. Thanks to everyone.
﻿
﻿﻿
I have been updating “Lucky World” time to time and share updated version with lucky’s fan. It’s updated upto Sep. 2012 so it’s Lucky World 09/12.
My family, my friends, my colleagues, my neighbours, everyone around me know me one of the biggest fan of Lucky Ali. My biggest dream is to meet with Lucky Sir and I know it will come shortly.For more lucky stuff and updated Lucky World, Please keep in touch with me. If you’ve got any idea, suggestion that can make it batter, please share with me at http://www.facebook.com/kapil.chandak , Mail me to kapilmail1982@yahoo.co.in,  or dial +91 9829 400966, I am waiting for your response meanwhile do take good care of yourself and get lucky.

Music is beyond the beyond for me 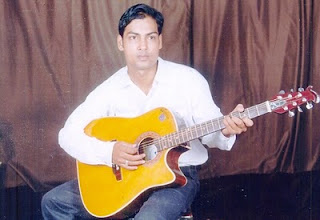 Music is beyond the beyond for me. I love music like anything. I love playing Guitar. I had a dream since i started listening to music. I find that sweet melodies, mellifluous tunes, and rich enveloping textures that are hummed out from six of my strings and ten of my gingers accomplish these. What the 9 hours work day takes out of my soul, the Guitar puts back in. It has been a life time magical melody for me. I can't define in single word or thousands pages. Music can make me see unseen places. that can even think about imaginary people without faces. Music can have a sad part that can make me cry sometimes. It's always in the people's heart, which it would be. If you feel lonely or happy, music is all you can need. Music is beyond the beyond for me! It's subset of God! Love music! and find God!