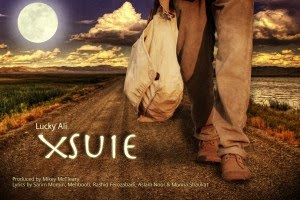 
'XSUIE' (pronounce Iksoi) in Urdu for 'फुरसत में' - at your own pace.) It is about moving ahead in life meanwhile enjoy every moment.
After a long gap Lucky Ali came with his most awaited album 'XSUIE'. It came after five years in Late 2009 from the heart and speaks to his entire fan who is taking life as it comes. This time Lucky Ali chose to break the conventional medium of physical album distribution so that fans can listen to the music without depending on labels for promotion (or otherwise!) and physical distribution of CDs DVDs Cassettes. The songs are available only online for now via http://www.bluefrogsounds.com/ and http://www.nimbitmusic.com/luckyali . An excited Lucky says, “It set me free to express myself.”
Why he has selected the way to release Xsuie online only? Why he took 5 years long gap for it? There are several reasons. Lucky ali is not interested to work under a labels. He had no good experience with commercial music companies. He said that music companies are making money only not giving value to artist. (It’s known T-series changed and aired another version of video of ‘Kabhi Aisa Lagta hai’ without letting him know in 2004). He Says “Other directors come in to create something more in tune with a market's needs and I respect that, but I would always prefer the careful work that Mahesh puts into the videos.”
he shrugs “There were some differences in opinion between the music company and me. I don’t agree with the item numbers they put out,’’. 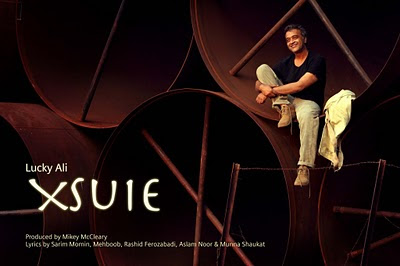 "Another reason was that, releasing songs online reduces the carbon footprint. Getting so many CDs out is not good for the environment. Since I attach myself with the initiative (to save the planet), I take care of it," he added.
"Things are changing and trends are altering. People are more digitally literate now. As it is when you put out your music digitally, the quality of sound is high. But when you put it on a CD, the sound starts deteriorating. I didn't want that to happen”.
"It is time for us to realise that the world is on a different platform altogether and we need to change too," he said.
Explaining his absence from the pop scene for five years, he said: "I like working on my own pace, that's why my album's name is also 'Xsuie' that means at your own pace – Phursat Mein"
On July 22nd 2004 his illustrious father - great comedian Mehmood passed away. "There is no meaning to do something, because everything I have been doing, doing only for my dad and want to show that I am not bad son.” “After dad died, things were very strained, so I wanted to just hold on for sometime…you know I didn’t want to do things just for the sake of doing them. I like to do things at my own pace”.
Lucky said. That’s why he took long period of time for Xsuie.
"In the last five years, I felt that it was not the right time for me to express myself. I was looking for my anchor. I was doing various things - I was involved in farming at my own farm, meeting farmers, horse breeding. Travelling was high on agenda and at the same time I was making music too."
Lucky loves and respects his all fans and doesn’t want to keep them away from his stuff while he is not happy with music company. He found a way to reach every fan. The songs of his new album are available on sites like www.nimbitmusic.com/luckyali  and www.bluefrogsounds.com/musicstore/?album=50 . Up to December 2009 lucky has released 7 tracks via these sites. There are 16 tracks to be released. Lucky Ali is busy in shooting of another soulful and refreshing videos for Xsuie. He planned to make 4 to 8 videos. Awesome video of “Dil Gaye Jaa” has been shot and available at Youtube.
Click here for Lyrics of Xsuie Songs

As a Lucky Ali fan, I thought you might be interested in Lucky Ali's Interview and an exclusive release for the album Xsuie by Curry Smugglers